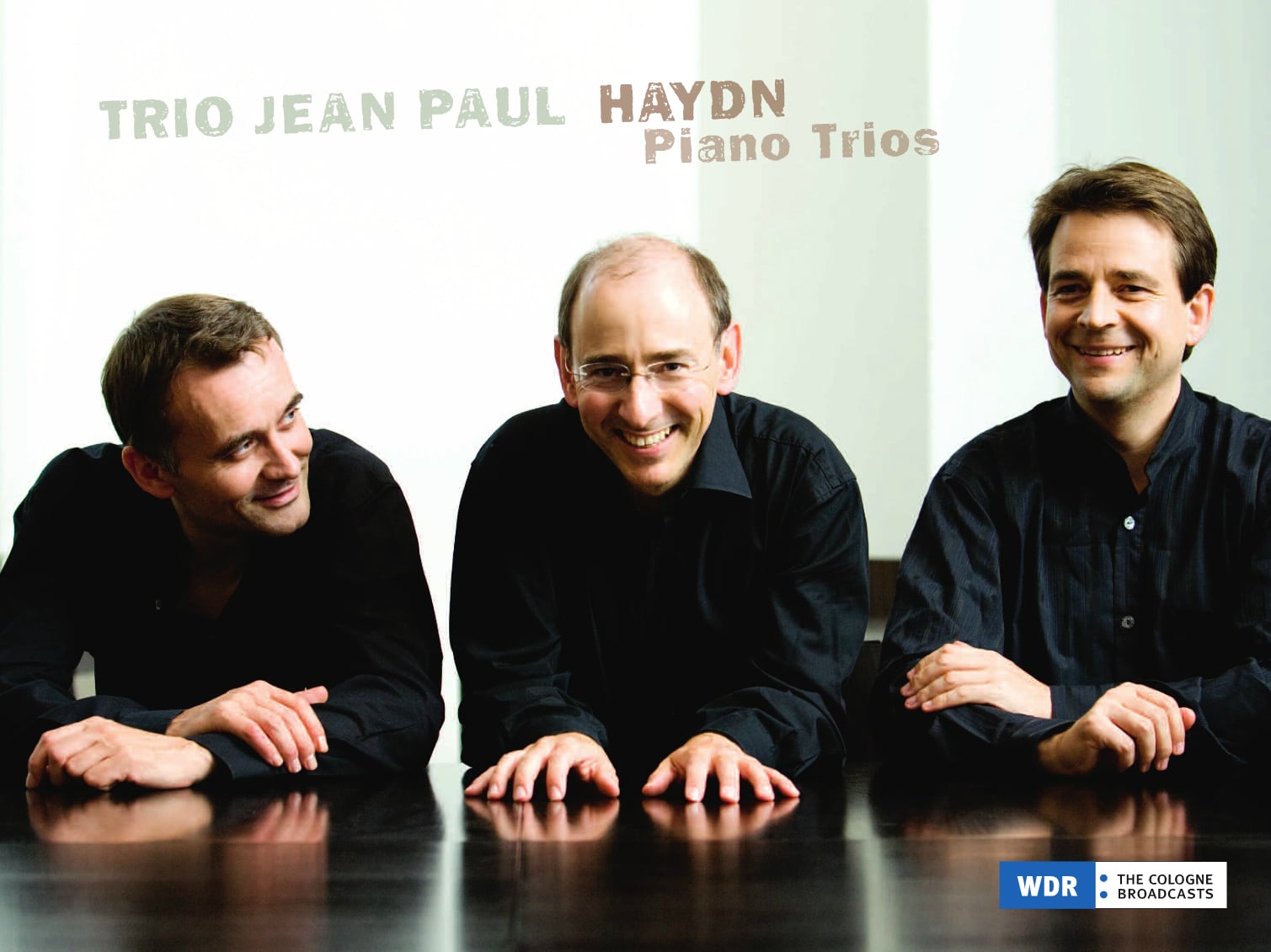 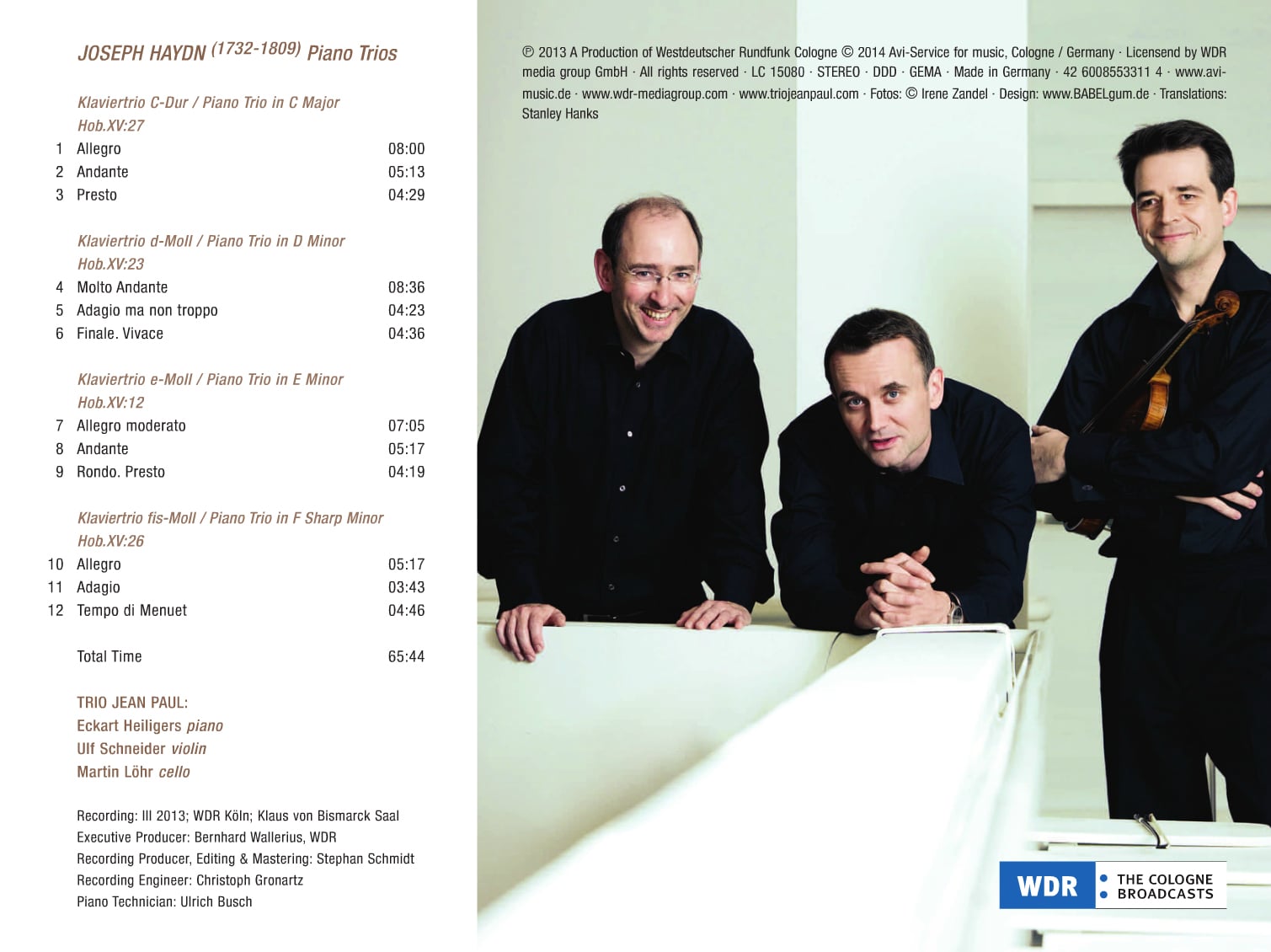 C – D – E – F#. The keys of the four Haydn trios on this disc form an ascending progression corresponding to the tritone, regarded since the Middle Ages as the most dissonant interval of all. The octave, conversely, has been regarded since ancient times as a symbol of divine unity and purity. The tritone divides the octave into two exact halves, thus destroying that unity – which is why it is also known as the „diabolus in musica“.

To call Haydn’s music “diabolic” would be stretching the analogy too far. Nonetheless, in its hovering, unstable quality allowing resolutions in opposite directions, the tritone can illustrate one of the most marked traits we find in this composer’s output. His music is known for its typical and vital element of surprise: Haydn indeed managed to foil the well-educated expectations of 18th century audiences quite consistently. He must often have felt a quasi-diabolical pleasure in perturbing his listeners with different kinds of bits, constantly varied and renewed. Especially in the “pure” area of musical conversation – e.g. chamber music – Haydn stood apart from other composers thanks to his witty sense of humor, his knack for inserting the most fitting punchline at exactly the right moment. No other composer of the Viennese Classicism possessed Haydn’s unique, infallible anticipation of what the listener’s emotional state would be like at any given moment, foiling expectations and bringing them out of balance with a decisive kick in the shins.

However, we would obviously be missing out on much else if we attempted to reduce Haydn’s music to that aspect alone. Profound earnestness paired with the most exalted and sincere emotions – all of these often coexist side by side with sparkling, witty feints, followed by other instances of droll musical discourse and interchange. Haydn is a story-teller. One of our most exciting joint ventures as performers is to try and find out what his stories are actually about. In fact, before he set off to write a new piece, Haydn would indeed think up a story and write it down. Once the score was finished, however, he destroyed the original text. Thus, regrettably, today’s performers and listeners no longer have access to the content that inspired his music. But we can still observe the way Haydn follows a “narration” as he goes about applying the art of musical rhetoric in all its nuances. To a certain extent, the storytelling aspect also explains why the long-prevalent Romantic interpretational approach so much affected performances of Haydn’s works – even more than Mozart’s or Beethoven’s music. Performers with no knowledge of 18th-century rhetoric often forced Haydn’s primarily language-based music into the corset of “long phrasing arcs”. The result was enticing yet ultimately incoherent, since it ignored Haydn’s underlying discourse – the explosive energy beneath the surface. The same Romantic approach also helped form that “good-natured Papa Haydn” image, so far removed from historical reality. For a long time Haydn’s stories lost their meaning, their almost revolutionary potential. Haydn, unbeknownst to many, had ultimately ventured far beyond the musical vocabulary of Mozart in his eagerness to experiment in the areas of composition, style and, notably, harmony.

The majority of works on this CD are in minor mode. More clearly than those in major, such works of Haydn have the tendency to strikingly juxtapose earnest, heartfelt expression in the initial and middle movements with almost unrestrained “slapstick comedy” in the final movements (which often turn to the major key). In spite of such contrasts, each one of these works forms an artistic whole that invariably transcends the content expressed in each section. However, there is one exception to the major-minor dialectic in final movements: the last work on this CD, Trio Hob.XV:26, written during Haydn’s second stay in London. He was deeply emotionally involved with the work’s dedicatee, the amateur pianist and widow Rebecca Schroeter. But due to his marriage their relationship ultimately had no future. Thus, in this only “true” minor-mode work (in the eloquently chosen, particularly tragic key of F-Sharp minor), Haydn refrains from flipping the coin towards the positive. Held in a tragic mood, the work ends without redemption, in sullen resignation.

For performers such as ourselves, the major question nonetheless remains: how can we make Haydn’s music ‘sound’ adequately on so-called modern instruments? Instruments of today, such as those we play, are optimized to perform in large concert halls. The resulting trio sound is thus fundamentally different from what must have been going through Haydn’s mind when he wrote these works. (Incidentally, this not only applies to music of Vienna Classicism, but also to Romanticism, another great age of the piano trio. Schumann’s piano, for instance, still sounded completely different in many ways from today’s modern grands). We are nevertheless convinced that the elements of rhetoric, the art of articulation and stylistic knowledge of 18th century performance practice are what enables us to decrypt Haydn’s music and its expressive content on today’s instruments, as well. A modern piano trio does not have to sound exclusively Romantic. By consciously controlling the amount of vibrato at all times, the strings can either merge with the more percussive piano or disassociate themselves entirely from its timbre. Together as a trio we can pursue a historical trace of fundamental importance: the 18th century tradition of articulation which was essential for the music of the First Viennese School, and which we can learn to re-apply on our ‚modern’ instruments. In our quest to uncover the musical content below the surface, one of the most exciting challenges is that of achieving true stylistic flexibility.

In all its manifestations, Haydn’s art remains profoundly human. Of visionary transcendence, it nevertheless maintains a central focus on human destiny – a universal vision capable of including and subsuming both the tragic and the comic. Whenever we attempt to unravel Haydn’s narrative threads – tracing their seemingly inexhaustible variety of invention, adapting our sonority to these works and slipping into the widest variety of roles – we are returning to a constant source of inspiration and delight.